An award-winning Norfolk family adventure park has presented over £5,000 to a vital children’s charity, helping it transform children’s palliative care for the county.

During 2018, Roarr! Dinosaur Adventure has been supporting East Anglia’s Children’s Hospices (EACH) and the charity’s nook appeal.

The dinosaur-themed adventure play park has something for all ages to enjoy and has so far contributed £5,110 to the appeal, having signed up to the nook business network.

Roarr! Dinosaur Adventure, based in Lenwade, was the joint headline sponsor of EACH’s King’s Lynn Bubble Rush earlier this year. It also sponsored a bubble arch at the Norwich Bubble Rush, as well as the charity’s float at the Lord Mayor’s Procession. The year concluded with support for EACH’s abseil down The Forum in September.

Adam Goymour, Roarr! Dinosaur Adventure Park Manager, said: “We’re proud to directly support young people with life-threatening conditions, in the heart of the communities within Norfolk, through our partnership with EACH.

“The nook appeal is such a worthwhile cause and being able to help contribute towards this and make EACH’s vision a reality is very rewarding for us.

“Both us and EACH are a family and child like-minded, focused operation.

“Norfolk is a superb county and being able to collaborate with EACH to highlight this is a remarkable opportunity.”

Sophie Mayes, EACH Norfolk Corporate Fundraiser, said: “With the roof of our new hospice having recently been completed, we’re getting ever closer to making our vision for improved children’s palliative care in Norfolk a reality.

“It must be remembered, though, that we still have some £1.6 million to raise, so the continued support of everyone, including staff of and visitors to Roarr! Dinosaur Adventure, is vital.”

The nook appeal was launched in November 2014 to raise £10 million for a new, purpose-built hospice in Framingham Earl.

For more information on everything EACH, go to www.each.org.uk. For more specifically on the business network, call Sophie on 01953 666768 or email her at sophie.mayes@each.org.uk. 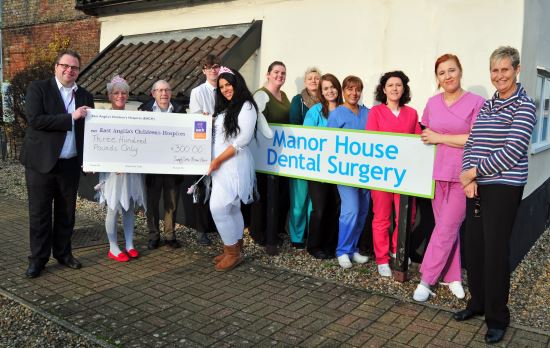 EACH receives fundraising boost thanks to old teeth implants

The surgery sends off old crowns and bridges to be melted down, receiving a cheque after the precious metals are sold.

Staff at Manor House have decided they want a variety of charities to benefit and a new one will be chosen biannually.

EACH is the first to benefit, with between 50 and 75 old crowns and bridges bringing in £300.

Mike Hatton, EACH Norfolk Corporate Fundraising Assistant, said: “This is, perhaps, the most original way of fundraising I’ve come across! It was great to meet the team at the surgery recently, as well as the tooth fairies! We really appreciate their support.”

For more information about EACH, go to www.each.org.uk. 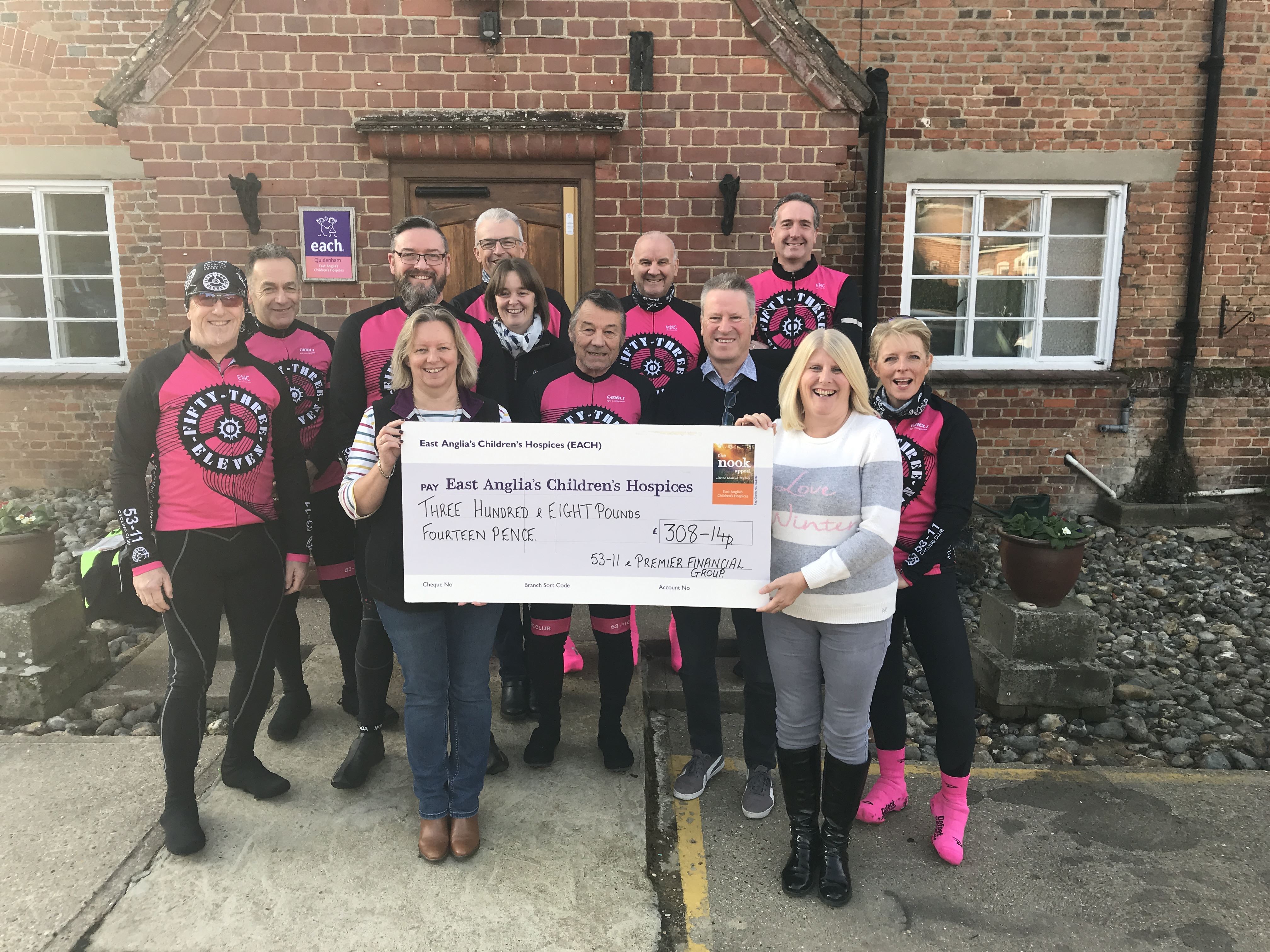 On your bake! Cyclists raise hundreds of pounds for the nook appeal

A group of Norfolk cyclists have raised £308.14 for the nook appeal by treating themselves to cake.

The 53-11 Cycling Club was founded in April 2014 and its members, of all ages and abilities, are easy to spot as they wear unmistakable, bright pink jerseys.

The club leads social rides on three evenings of the working week plus during the day on Sundays.

The rides often include some sort of café or pub stop, further promoting the social aspect. Recently, cyclists have been indulging in cakes baked by Sally Eggleton, donating £1 to the nook appeal for every slice.

Donations have, generously, been doubled by Ian Goody, a member of 53-11 and also CEO of Premier Financial Group that sponsors the club.

Cyclists handed over the money when they cycled to East Anglia’s Children’s Hospices (EACH), the charity behind the nook appeal, in Quidenham.

Tim Jenkins, EACH Norfolk Community Fundraiser, said: “How fantastic that these folks are doing something they love, having a tasty treat along the way and managing to support us in the process! We’ve around £1.6 million left to raise of our £10 million nook appeal. The money is funding the building of our brand new hospice in Framingham Earl that will transform children’s palliative care for Norfolk.”

The 53-11 Cycling Club has agreed to support the nook appeal throughout 2019 when it hopes to raise double what it has done this year.

This website uses cookies to improve your experience while you navigate through the website. Out of these, the cookies that are categorized as necessary are stored on your browser as they are essential for the working of basic functionalities of the website. We also use third-party cookies that help us analyze and understand how you use this website. These cookies will be stored in your browser only with your consent. You also have the option to opt-out of these cookies. But opting out of some of these cookies may affect your browsing experience.
Necessary Always Enabled

Any cookies that may not be particularly necessary for the website to function and is used specifically to collect user personal data via analytics, ads, other embedded contents are termed as non-necessary cookies. It is mandatory to procure user consent prior to running these cookies on your website.